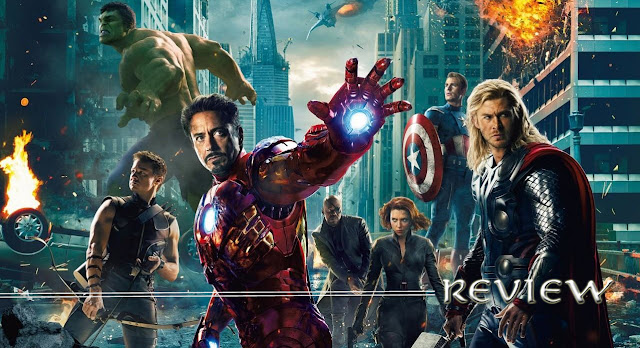 There’s a terrific shot midway through The Avengers’ final reel where the camera encircles it’s titular band of heroes, united in the face of overwhelming opposition, that perfectly encapsulates and celebrates the achievement of this ambitious box office spectacular. It is in many ways the apex of the kind of pure fan-service upon which much of the film rests - a swing around the assembled Avengers unit as each poses or readies their weapon in their own atypical fashion - but not only is it a supremely satisfying moment for the audience, it is also perfectly demonstrative of the fact that this is a film focused on both no one individual yet all characters equally, and neatly symbolic of the behind-the-scenes coming together and collaboration that has led to this point. 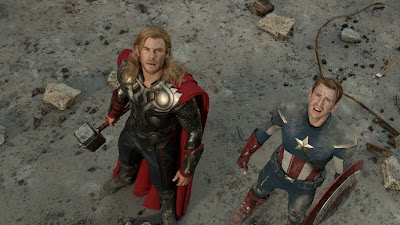 The Avengers (or Marvel Avengers Assemble to give it’s UK release title) is the culmination of the ‘Marvel Cinematic Universe’ - a series of Marvel Studios releases deftly produced with the intention of characters and narrative threads intertwining between the likes of Iron Man (2008 and it’s 2010 sequel), The Incredible Hulk (2008), Thor (2011) and Captain America: The First Avenger (2011) before finally coming together in this release. The real strength of this unique approach means the respective movies have already dealt with much of their own exposition and backstory, and whilst there is just about enough backtracking and explanation provided for those who have not seen the previous films and for The Avengers to still hold it’s own as a standalone title, there is little doubt that those who will appreciate the film most (and enjoy some of the numerous in-jokes), are those who have gone on this rewarding, unique journey with Marvel and it’s cast.

The film picks up with narrative threads mostly established in Thor and Captain America as the arrival of the villainous god Loki (the primary villain in Thor and Tom Hiddleston in another wonderfully contemptuous turn) prompts Samuel L. Jackson’s Nick Fury and his peacekeeping organisation S.H.I.E.L.D. to assemble a unique band of superheroes to counter the threat. Cue the arrival of the likes of Iron Man, Captain America, Thor, The Incredible Hulk and the less instantly-recognisable super assassins Black Widow and Hawkeye. It’s a testimony to director Joss Whedon’s writing and vision that each member of the Avengers unit gets their own chance to shine and the handling of such a large and diverse cast of characters remains fairly consistent throughout. Beginning with the initial conflicts and face-off’s between the characters (the arrival of Thor for instance, prompts a great duke-out between several of the heavy hitters) through to the tensions, wordplay and eventual coming together of the team as a whole, this is the kind of deft handling of superhero character and spectacle which has not been so effectively judged since Bryan Singer brought the X-Men to our screens. It’s a notable feat when some of the larger characters in the cast, particularly the likes of Tony Stark, could easily have overshadowed the rest, but each of the unit are given due investment and respective character beats to prevent this from happening. 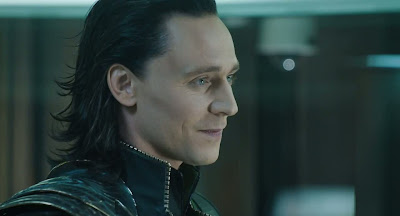 The only exception to this is Jeremy Renner’s Hawkeye, whose limited screentime, lack of pre-existing backstory (aside from a cameo appearance in Thor) and very tentative ties to the narrative creates a generally underwhelming addition to the rosta. There are moments and developments which allude to a deeper involvement with Scarlett Johansson’s Black Widow, but whereas she dips in and out of emotional ambiguity and surprises throughout (including a brilliantly judged about-turn when the character has seemingly devolved into more cliched territory), Hawkeye is a decidedly more one-dimensional affair. From a purely visual perspective his abilities and aesthetic are also completely outshone by lightning-hurling norse gods, scenery-leveling green mutants and the like, and much of his archery antics and abilities come across as somewhat old-hat.
The same can be said of much of the supporting cast, who are given little to do other than be reactionary or conduits of plot information. Stellan Skarsgard and Gwyneth Paltrow reprise their roles from previous films, and Cobie Smulders is introduced as S.H.I.E.L.D. agent Maria Hill, though all are given relatively little to do, even Smulders and Skarsgard who are far more central to the happenings of the plot. Fortunately, Clark Gregg’s Agent Phil Coulson is given a couple of great moments, and as a character who has been revealed gradually over the course of the preceding movies it is satisfying to see him step up to a more central role here and make his presence felt with a neat blend of comedy and trademark cool. 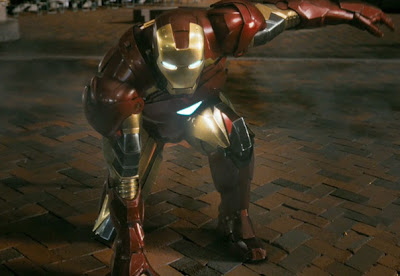 The film’s narrative similarly suffers from being overly streamlined in places, yet unnecessarily derivative in others. The central antagonistic force behind Loki’s plans and the spectacular New York finale are never really given any grounding or explanation other than a smidgeon of cursory flashback sequences, whilst unnecessary subplots such as the S.H.I.E.L.D council interfering with the threat of a nuclear strike feel unnecessary and shoe-horned in to compound on the tension and drama. It is time and focus that could have been spent on establishing the creatures attacking whom we know next-to-nothing about. It is unfortunate, as the few glimpses we do get of the driving powers behind the alien force are genuinely quite disturbing and effective, so it is disappointing to see such a key component of the film relegated to being little more than Loki’s otherworldly foot soldiers - particularly so when you consider the Frost Giants of Thor, who played a similar role, were given far more in the way of motivation, backstory and a deep personal connection to Loki and his ambitions. It leaves a strange detached feeling to the creatures that form the crux of the final showdown, even the larger more spectacular nasties that emerge and need sorting with a well-time Iron Man to-the-gullet - almost to the point of them being perfunctory alien invaders who we know little of, why they are choosing to attack and why Loki is aiding them - anchored only further by the Avengers and S.H.I.E.L.D. being more focused on Loki himself and never really asking any such questions of this attacking army he constantly refers to throughout the film. 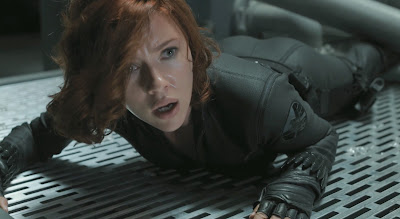 However, despite these few minor shortcomings, The Avengers exceeds where it really needs to - with the central unit themselves and as a remarkably kinetic and thrilling superhero visual spectacular. Whedon’s direction is assured, bold and sweeping, with some remarkable action sequences and set pieces executed with stunning choreography, stunt-work and remarkable visual effects. In terms of spectacle and execution it is as vibrant and exciting as the finest the genre can offer, and in places manages to put the likes of even Spielberg, Bay and Emmerich to shame (and unlike the latter two we have a genuine investment in those amongst the flash and awe). From the initial opening action sequence set in S.H.I.E.L.D.’s base of operations, the film kicks off aggressively and rarely lets up. Even expository scenes crackle with a neat application of humour and tension, courtesy of the excellent writing and inspired performances (Robert Downey Jnr.’s Tony Stark on prime scene-stealing form) and Whedon being frequently brave and savvy enough to punctuate the action with moments of almost farcical comedy - a particular highlight featuring the Hulk refusing to listen to one of Loki’s self-aggrandising speeches. There is a real sense of joy at the realising of this project throughout, and never do Whedon or the cast allow its to get to become too self-important, they’re all clearly having far too much fun to let that happen. 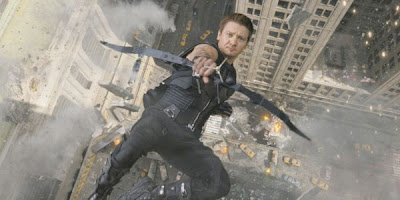 Regardless of whether you have followed this project from its beginnings in the previous movies or come to it completely fresh, this is in many ways the perfect superhero movie and one of the purest, most unapologetic and enjoyable popcorn movies of recent years. In a summer where the genre is going to be offering more conflicted character-drama in the somewhat darker re-imagining of the The Amazing Spider-man and the sombre return to Christopher Nolan’s Gotham in The Dark Knight Rises, what The Avengers offers is a much lighter, instantly accessible and supremely entertaining action-adventure spectacular, one that is confidently comedic yet undeniably awesome and deserves to be nothing less than a hulk-smashing success at the box office before that oh-so-serious spider and bat come out to play.
They certainly have quite the act to follow.


Be sure to check out our YouTube video review (linked at top of page) as it contains separate points of discussion from this written review, behind-the-scenes footage and film clips.