THE BOOK OF MORMON - THEATRE REVIEW 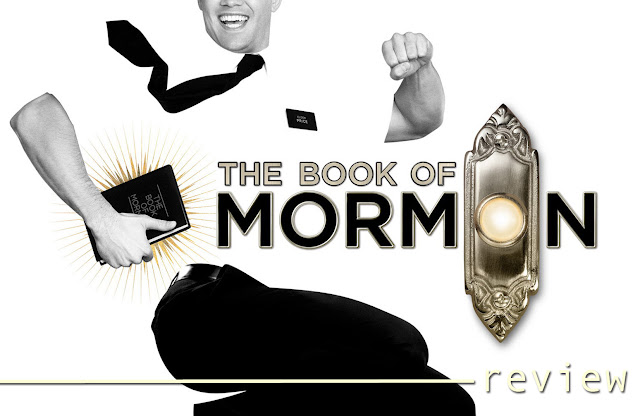 THE BOOK OF MORMON AT THE PRINCE OF WALES THEATRE, LONDON

Hello! My name is Elder Pedley, and I’d like to share with you the most amazing show! 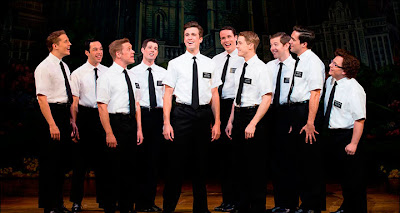 Shockingly predictable and derivative a review opener as that may be, the sentiment is nonetheless completely accurate. The Book of Mormon is indeed nothing short of amazing, and the kind of whirlwind, tour-de-force injection of genius, originality and vigour into the arm of musical theatre that comes along very rarely indeed. Indiscriminatingly adult and plenty high on shock factor without ever being cynical or mean-spirited, and despite it’s breadth of potentially offensive or insulting content, Mormon deftly avoids being crass or overtly vulgar, thanks mostly to the remarkable honesty and truth in the writing throughout. For a show that tackles the likes of the Africa AIDs pandemic, some of the inherent absurdity of the Mormon backstory and murderous warlords with a penchant for female circumcision amongst others, this is no mean feat, and is a testimony to all involved that the message and tone of the show overall is an incredibly positive, celebratory and empowering one. 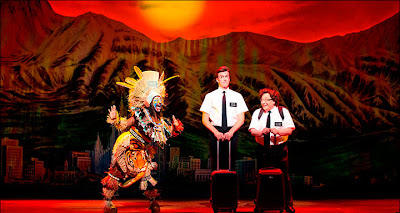 The show follows Mormon Elder’s Price (Gavin Creel) and Cunningham (Jared Gertner), in the archetypal mould of unlikely buddies, as a duo of missionaries who are given the task of spreading the word of Jesus Christ (of the latter day saints) to Uganda, much to Price’s chagrin (believing Orlando, Florida to be his own, almost commodity fetishist personal paradise instead). Once there, they are given the task of attempting to convert a local tribe to their faith where the existing team of missionaries have failed, whilst contending with the ever-present threat of the aforementioned warlord with a particularly unmentionable moniker. To delve any further into the plot would spoil a show punctuated with surprise and invention, but needless to say it moves at a great pace with purposeful direction and with nothing in the way of Act II lulls, filler songs or wasted time. Parker and Stone have always demonstrated brilliant instincts for storytelling and narrative shaping, and nowhere is this more apparent than the organic and incredibly satisfying job they and their fellow creatives have done with Mormon. 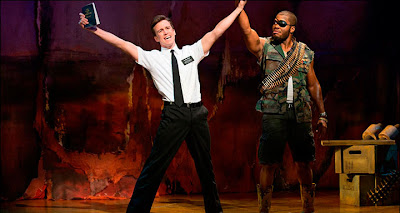 As well as being an appealing tale, one of the most noteworthy praises for the show has to be it’s proficiency as a musical. I said upon the release of South Park: Bigger, Longer and Uncut back in 1999 how evident the love and appreciation Stone and Parker have for musicals was, and in joining forces with Avenue Q writer Robert Lopez, they have crafted in Mormon a production which is almost a love letter to the medium, and a shining example both technically and artistically of what it is capable of. The soundtrack lovingly evokes and parodies a whole spectrum of showtune hits, with ‘You and Me (But Mostly Me)’ offering echoes of Wicked whilst The Lion King’s ‘Hakuna Matata’ is given a bigger and much badder brother in the form of the hilariously matter-of-fact ‘Hasa Diga Eebowai’. The craft, wit and character that practically every number demonstrates, complemented in particular by Casey Nicholaw’s stellar choreography, is of an incomparably progressive, hilarious and oft-ingenius standard. From a toe-tapping routine of repressed homosexual Elder McKinley leading his fellow Mormon’s in ‘turning off’ their emotions and unwanted desires that would make Irving Berlin proud through to a decidedly South Park-esque deviation into the ‘Spooky Mormon Hell Dream’ complete with Jeffrey Dahmer, Genghis Khan and Hitler, The Book of Mormon is a brilliantly varied bricolage of musical theatre that fully exploits and celebrates the history and strengths of the art form as a whole. 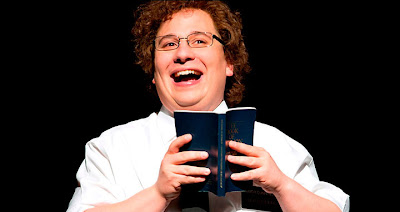 The assembled cast for this West End production, a mix of transfers from the US tour and original broadway production and new British talent, are quite possibly the best you will find on the West End at the moment. It’s high praise indeed, but the company is exceptional across the board, their talents amplified by the great writing, music and characters they are given to work with. Jared Gartner has the showier role of Elder Cunningham, a diminutive ball of energy, good intentions and occasional fabrications (that leads to a raucous extended act II showstopper) and is a hilarious delight throughout, whilst Gavin Creel is equally exceptional as the somewhat self-serving and more straight-laced Elder Price. In a less savvy production, Price would be played almost purely as the straight man, and whilst Cunningham gets most of the more overt comedy moments and great opportunities to bounce off of his counterpart, Elder Price is fleshed out into an equally engaging and genuinely entertaining figure, with Creel demonstrating intense charisma and some remarkable technical skill and physical comedic prowess throughout. As a duo they are near faultless and confidently carry the show on the back of both their individual performances when separated (particularly in the second act) and the dynamic chemistry between them as a pair. 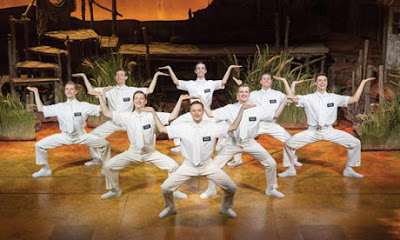 Alexia Khadime is parts fiesty, funny and tender as sweet-but-naive village girl Nabulungi, and Giles Terera is bombastic yet strangely venerable (in a warped, Trey Parker and Matt Stone sort of way) as her pragmatic father Mafala. Stephen Ashfield gives one of the show’s most adept comedic turns as the effeminate Elder McKinley, with a brilliantly consistent and nuanced masterclass in physical and character comedy that frequently threatens to steal the show. I’ve had the pleasure of getting to see some genuinely world-class musical ensembles at the West End and beyond, from the likes of the sensational original casts of Matilda the Musical and Wicked through to the ever-exceptional talent involved in Les Miserables, and it is no hyperbole to say the cast of The Book of Mormon are probably uniformly the most capable and impressive company I’ve had the joy of watching. 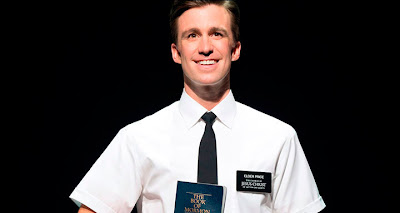 In regards to the show’s overall message and it’s handling of the Mormon faith itself, it’s surprising and a little disconcerting to read fellow reviewers such as Charles Spencer of The Telegraph not seeing past the surface fun-poking at the church that the show offers, and instead critiquing it for its mockery. Yes, there are plenty of quips, gags and even numbers which do a great job of satirising the fundamental bizarreness of the story behind the titular tome, or ridicule some facets of the faiths beliefs and conduct and it’s occasional sense of self-importance, but as is often the case with the work Parker and Stone do on South Park, it seems some people will be unable pierce the surface tomfoolery and shocks to see the key message being conveyed. For all of the digs and barbs, The Book of Mormon more than showcases the good-natured and generally uplifting ideology the faith and it’s missionaries have, and champions an overall message of not letting yourself get confined or lost in the detail but rather seeing the bigger picture, re-affirming that the fundamental MO of the Mormon faith is one of positivity, warmth and kindship. 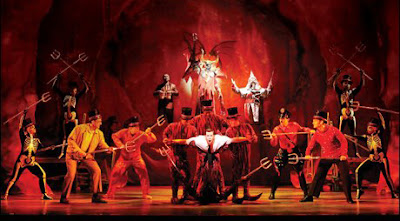 Of course, for all of this conjecturing over meanings, messages and mantras, the show has plenty of moments revelling in being plain silly and purile, and clearly rejoices in it’s ability and willingness to do so. This is an outrageous theatre-going experience that at times almost dares you to laugh along with it, but is so irrepressibly funny you’ll be hard-pressed to not find yourself screaming at jokes or shamelessly politically-incorrect gags that outside of this arena of inspired insanity would normally have you reaching for the OFCOM helpline.

The show isn’t without it’s flaws, though these are mostly minor quips that seem unfairly pedantic to point out, such as some of the repeated intertextuality to the likes of the Lion King stage show (clearly an inspiration throughout), The Lord of the Rings, Star Trek and Star Wars occasionally feeling a little over-ubiquitous, and to be wholly objective for a moment the show as a whole is almost certainly going to be divisive, with some no doubt finding it’s unashamed tone or some of it’s content offensive or off-putting. 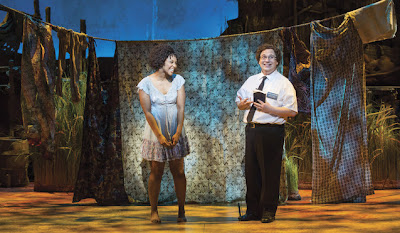 For those who are not so easily dissuaded, however, and I like to think that will hopefully be the majority of the theatre-going audience that a show of this calibre deserves, they will find in The Book of Mormon something quite genius indeed. Every component, facet and creative element of the production is of such an exceptional standard that its bursts and crackles with an energy, joy and attainment that few shows can match. It is not idle gushing or adoration of Stone, Parker, Nicholaw, Lopez and the rest of the creative team but wholly deserved praise for a show that boldly stamps its own identity from the offset, is relentlessly hilarious, brutally honest, unforgivingly satirical, tirelessly intelligent and easily the most characterful and original musical to arrive in the West End in a very long time. With tickets worth their weight in gold (plates), go and see this brilliant show if you can. The Mormon’s are most definitely here, and what an arrival - bringing with them quite simply one of the very best, and certainly freshest and most invigorating, musical theatre productions in memory.


THE BOOK OF MORMON is currently running at The Prince of Wales Theatre, London. For more information visit the official website (link below) or www.thebookofmormonmusical.co.uk

Press tickets for the Opening Night Premiere of The Book of Mormon were provided courtesy of Dewynters and Cornershop PR. (A)musings Media gratefully acknowledges their generous invitation.
Posted by (A)musings at 00:34