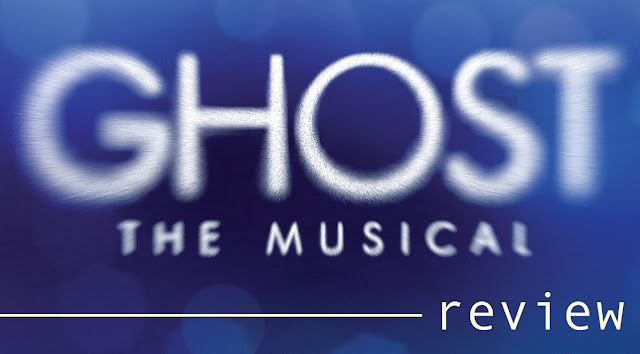 GHOST THE MUSICAL AT THE WOLVERHAMPTON GRAND THEATRE 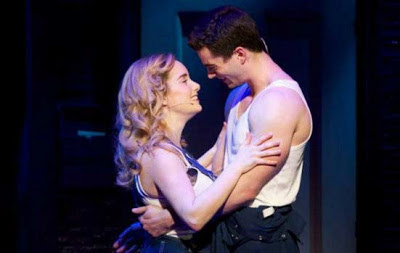 Reviewing both West End and touring productions can sometimes be a slightly disjointed affair, and the expectations taken to the London boards have to sometimes be a touch tempered for their touring and regional counterparts. That’s not to suggest any abject inferiority or personal preference, but often the sheer practicality and demands of a production going on tour and repeatedly moving venues, often allowing no more than a days setup time, requires natural compromises be made when it comes to staging, more elaborate mechanics or flats, and generally a less cohesive and ambitious affair than London or otherwise permanent shows can usually offer.


Enormous credit must go, first and foremost then, to Ghost the Musical for being single-handedly the most ambitious, bombastically visceral and tirelessly inventive touring musical production I’ve had the pleasure of experiencing. Naturally much of this stems from the original London production, but thankfully there is no measure of compromise or limitation here - in addition to the intimate, tender and winning core story, which is fortunately never overshadowed or lost amongst the visuals, the current UK touring show is an at-times breathtakingly dynamic and kinetic explosion and exploration of eye-candy and splendour. Never before has the stage felt so transformative or transportive and the theatre so malleable and flexible an arena of visual delight. From a perspective-shifting, gravity-defying encounter on a New York underground train to a dazzling array of colour and coding depicting the autonomy and mayhem of modern working life in the city through to simpler and more tried-and-tested methods such as body doubles, wirework and distraction to sell some of the smaller but equally important moments of the show, there is a palpable sense that those involved in this terrific production were keen to marry the simplicity of it’s central narrative with a dazzling, thoroughly original and incomparably showy justification of bringing that story to the stage, and they most certainly succeed. 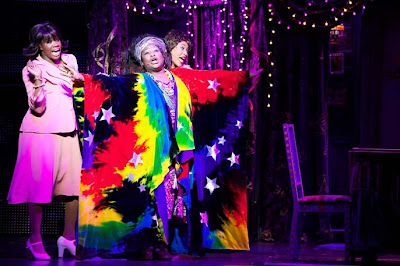 Based on the 1990 hit film of the same name, Ghost the Musical depicts young lovers Sam (Stewart Clarke) and Molly (Rebecca Trehearn) as they begin a new life living together, she an aspiring sculptor and artist, he a successful banker. At the risk of spoiling things for anyone who hasn’t, say, read the title of the show, tragedy ensues and Sam is killed, leaving Molly alone and his spirit stuck on Earth trying to uncover the truth behind his death. He enlists help from fake psychic Oda Mae Brown (Wendy Mae Brown), who it transpires actually can hear the dead, and the two begin an unlikely (and endearingly hilarious) partnership to find out who was responsible for Sam’s death and protect Molly from the unravelling fallout. It’s decidedly high-concept, yet the relationships are so wonderfully defined and tenderly observed, and the technical feat of realising and representing the spirits so effectively and creatively handled that it never registers as false or hokey, and whilst naturally some of it is heightened and writ-large for the transition from film to stage, it all still manages to work beautifully.

With a still-effective central narrative framed by some truly impressive technical and artistic packaging, it is a little disappointing that the musical numbers generally don’t manage to be quite so memorable or impactful. They are by no means bad, but certainly overshadowed by the performances, staging and impressive work done with video and lighting throughout. At times the score feels a little inhibiting and stalling, with Molly in particular suffering from a number of vaguely repetitive ballads which keep her in something of a stasis and emotional loop for the latter half of the first act and most of the second. There are some punchy or more moving numbers and set pieces, with Oda Mae’s ‘I’m Outta Here’ a wonderful injection of diva, disco and pizzaz, ‘Are You a Believer’ an upbeat, comedic slice of borderline gospel and ‘Three Little Worlds’ an admirably subdued and confidently tender play between the two young lovers, but overall this is a show which succeeds in addition to, and not particularly because of, it being a musical. ‘Unchained Melody’, The Righteous Brothers’ iconic theme to the original movie, makes numerous appearances throughout in different forms, becoming used in a number of inventive and alternate ways, though in contrast to some of the more forgettable tunes it does leave one yearning for a fuller rendition, particularly come the shows climax and denouement. 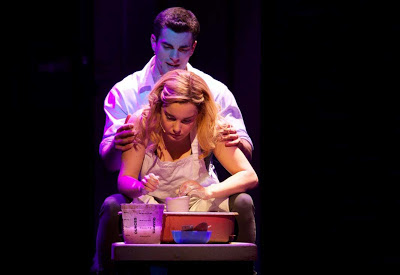 Fortunately, the current touring cast are uniformly strong, giving it their all and anchoring the heart and soul of the show amongst the less memorable music and potentially diverting visuals. Rebecca Trehearn is endearing and delicate as Molly, taking a mostly deflated, torn and forlorn character and rounding her out into a sympathetic, likable young woman, offering an innocent, easy charm over the more cynical and even grumpy interpretations of the role other actresses have delivered. Stewart Clarke gives a wonderfully energised and enthused turn as Sam, beautifully tender and sincere in the quieter and more intimate beats of the show whilst vehemently passionate and physical in the showier moments. With so much of the role being reactionary, he does a brilliant job of rooting the character as the audiences key figure of empathy, whilst also delivering some astoundingly good vocals as the show progresses. It’s pivotal to the success of the show that the audience are invested in Molly and Sam, and Trehearn and Clarke do a wonderful job of realising and facilitating this, crafting an evidently passionate (both physically and emotionally) duo whom it is very easy to root for and not wish to see so tragically torn asunder.

Outside of the central relationship, Wendy Mae Brown lights up and threatens to steal practically every scene she is in as psychic Oda Mae. In a role that made a star of Whoopi Goldberg (not to mention bagging her an Oscar), the musical’s Oda Mae may not have quite so well defined an arc as her movie counterpart, but she is easily and equally just as vibrant, entertaining and charismatic. Wendy Mae Brown gives terrific attitude and comedic sass, injecting the character with a little more bite and fire than Goldberg’s slightly more sardonic interpretation, and coupled with the aforementioned big numbers and set pieces make her undoubtedly one of the shows biggest, funniest and most soulful highlights. David Roberts rounds out the core cast as Molly and Sam’s close friend Carl, and he is suitably slippery and devious as the shows chief villain without resorting to pantomime excess or caricature. Also worthy of mention is Stevie Hutchinson who is a whirlwind of physicality, pent up rage and an impressive flurry of flips, kicks and almost balletic physical mastery as the initially hostile subway ghost who comes to teach Sam how to physically interact with his surroundings. 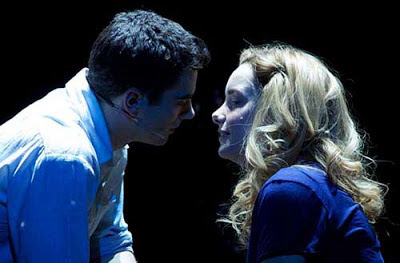 In all, this touring production of Ghost the Musical is a terrific and noteworthy achievement on a number of levels. Brilliantly balancing the moving, emotional simplicity of the original film with a dazzling musical theatre spectacle the likes of which few can compare, and all the more noteworthy for being a show making no compromises or cutbacks by dint of being ‘on the road’. Naturally there are areas in which the intimacy and closeness of film and the camera cannot be completely replicated on stage, with key moments such as the pottery wheel missing out on their impact and emotional (not to mention sexual) clout here, but in another fashion the immediacy and staggering creative invention of this production make it an engaging and impressive spectacle which can make the movie look sedentary by comparison. Fortunately, for all the comparisons between the film and stage show, and as extravagant and impressive an optical treat it may be, Ghost the Musical remains fundamentally a beautifully romantic and touching observation on love and loss, one both winningly performed and tenderly realised. Few shows can boast such a seemingly incongruent pairing of the intimate and tender with the bombastic, visceral and fantastic, and whilst some of Ghost’s score fails to fight a particularly strong case for the story being adapted into a stage musical, practically every other element of this continually impressive and tirelessly creative production does so rather effortlessly. As mentioned, it is one of the most impressive, experimental and (fittingly) downright cinematic experiences of musical theatre you are likely to find both on or off the West End, and an altogether commendable, and indeed recommendable, theatre-going delight. And whilst it might not quite be a five star musical,  it is undoubtedly a five star experience.

Tissues, of course, may be a necessity.

GHOST THE MUSICAL is running at the Wolverhampton Grand Theatre from Tuesday 4 to Saturday 15 June 2013.

CLICK HERE for more information on the shows' run at the Grand and to book your tickets!
Alternatively phone the Theatre Box Office on 01902 42 92 12.

Press tickets for this performance of GHOST THE MUSICAL were provided courtesy of The Wolverhampton Grand directly. (A)musings Media gratefully acknowledges their generous invitation.
Posted by (A)musings at 01:36