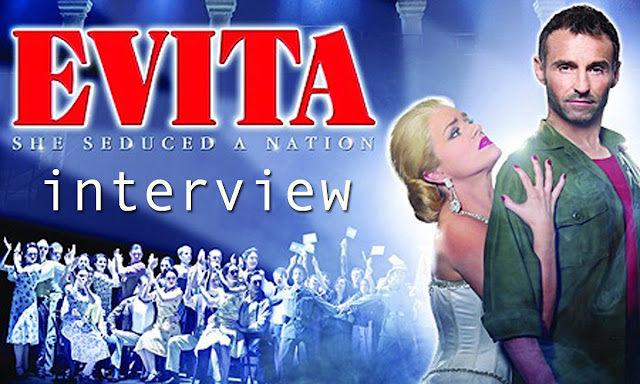 
Heading to the Wolverhampton Grand as part of its latest UK tour, Tim Rice and Andrew Lloyd-Webber's Evita is one of musical theatres most prolific and enduring success stories. In anticipation and celebration of the shows arrival in the Midlands, we headed to the Empire Theatre in Liverpool to interview it's two leads.

In this first part, Kyle interviewed Madalena Alberto, who is playing the titular role of Eva Peron (part one interview can be found HERE). This time round, Kyle chats to Wet, Wet, Wet frontman and growing musical theatre regular Marti Pellow, who plays Che in the touring production...

Marti Pellow has been many things to music over the course of his now 30 year career. His musical journey began as frontman of the massively successful Wet, Wet, Wet, who rose to pop superstardom in the late 80‘s and early 90’s, most prolifically with their 1994 behemoth ‘Love Is All Around’, which celebrated such a prolonged run in the UK charts that Pellow himself insisted on it’s deletion. After Wet, Wet, Wet (or at least until they reformed in 2004), he went on to celebrate subsequent success as a solo artist with a string of releases. And, as of the past decade, he has gradually become something of a musical theatre regular, notching up major roles on both the West End and Broadway, beginning with manipulative, debonair lawyer Billy Flynn in Chicago.


“I’ll be forever indebted to Kander and Ebb!” Pellow exclaims, praising the musical team responsible for the score and songs of his musical theatre debut, “I fell in love with their score and that was the start of it... and here I am ten years and umpteen musicals later!”


And from thereon in it becomes obvious from our discussions that despite his mainstream success and general ‘pop star’ labelling, he is not only hugely respectful and appreciative of his fellow artisans and songwriters, but also a remarkably knowledgeable and articulate curator for the art of making music himself, both as a technical craft and a means of telling a story and “taking the audience to that place where they can dream along with me”.

I’m sat with Pellow on a relatively dreary, rainy afternoon in June (ardently dodging the obvious Wet, Wet, Wet puns), at the Empire Theatre in Liverpool where Pellow’s current run in the UK tour of Evita continues. Laidback and thoroughly welcoming, we’ve already had a brief play around with our similar fashion stylings of jeans and matching flat cap (“Ah, I see someone got the note!”). Of his latest role, playing ‘Che’ in Andrew Lloyd-Webber and Tim Rice’s musical supershow, he noted the first challenge being the familiarity and ubiquitous nature of so much of Evita’s music, and the prolific interpretations of the role that have come before:

“I first became familiar with the music through the pop medium, it bled into many different genres. And when you come in to do musical theatre, it is what it is, within the dots, there’s a lot less freedom than as a songwriter. Getting off and finding yourself and engaging in your own imagination to make your character of Che completely different from David Essex or whoever’s came before you, it’s a challenge. And I love the challenge of that!”

Continuing his appreciative slant for his fellow musicians, he visibly beams whilst citing the quality of Lloyd Webber and Rice’s writing as being a huge part of helping him find and make the most of the role and the show as a whole:

“It’s about my imagination and how I inhabit a lyric - colouring the words so you understand the journey I’m taking you on through the gift of song, and you know, it’s the same with acting, I keep it pretty simple. And for all of it, if it’s beautiful writing, like [Evita], all the information’s there for you.”

As Che, Pellow acts as something of a moral arbiter in the show, narrating and overseeing the events in the life of Argentinian first lady Eva Peron as she rose to fame and power. Che continually questions Peron’s motives, insinuates at her abuses of power, repeatedly projecting his scorn to the crowds watching, and it’s a role which allows Pellow an unusual relationship with his audience, though one he has enjoyed experiencing on stage before:

“I think in the character of Che, he’s like the narrator in Willy Russell’s Blood Brothers. They’re quite similar because they observe and walk you and the rest of the audience through it all. So I get to engage in the audience a lot more, which I think gives it and him an honesty, and that’s something that excites me, getting to interact with people who are inspiring you and who make you want to go on this journey with them. That’s so important.”

That being said, he is clearly not averse to playing and championing more complicated or morally ambiguous roles:

“Whereas with characters like Billy Flynn, who isn’t that much different to me when I was in Witches of Eastwick, you play powerful, manipulative men, there’s a darkness going on there, and those characters are quite similar... Jekyll and Hyde is obviously another prime example of that. I love the darker side!”

Argentinian revolutionaries. Schizophrenic mad scientists. Corrupt musical lawyers. Dark, powerful, manipulative men. The works of musical theatre legends Russell, Lloyd Webber and Rice amongst others. It is all as far away from the humble, down-to-Earth upbringing Pellow experienced as possible, and he is the first to acknowledge that his passion and desire to get into a creative career was not the easiest sell to some of those around him:

“When you grow up in a working class environment, if you’re blessed enough to get an apprenticeship and so on, then that’s what you do. So when you come out the mould and you’ll be sitting with your father and he asks what your plan is and you say ‘well yeah, I’ve got a plan, I’m gonna be a singer in a band, I wanna do that’, he’s kind of perplexed because his point of reference suddenly goes out the window. If I’d have said I wanted to be a brick-layer, well that’s something he could get his head around. But he was only concerned that it might be something that might not come to fruition.”

Despite this, the passion and ambition was set, and nothing would shake it:

“I had such a strong will, I had youth and arrogance on my side. That’s what I was going to do and woe betide my father if he told me any different. I also had the support of my mother who was very much engaging in my dreams. So I had that.”

There is an endearing frankness, humility and honestly to how Pellow discusses his upbringing and family that moves away from the artist and the musician for a moment. When asked if there was any particular moment when, following on from the early doubts, he and his family realised the dream was becoming a reality, he gave a touching recount:

“I can remember my father coming to one of my concerts, which happened to be in front of fifty, sixty thousand people. I saw him there, sitting in the pit, looking up at me and then turning round and seeing sixty thousand people singing the songs that he’d heard me singing in my bedroom. That was quite a monumental moment not only just for me but for him too because it wasn’t just one or two people believing in what I did, but at that point thousands. Millions. Millions and millions.”

Having discussed musical theatre, Evita and the importance and influence of family upon him, we went on to talk about his most recent album release, Hope, which fittingly threads all those elements together. Speaking of Evita’s director, Bill Kenwright, Pellow continued:

“I’ve worked with Bill on and off for a few years and both of us have a great passion for musical theatre now, and the last project that I just did was an album of musical theatre songs. It’s a very eclectic mix, and I dedicated the album and named it Hope, who was Bill’s mum. She was a great lover of musical theatre as I am myself and she really inspired us, and when I finished the body of work and with the songs that we had picked I wanted to dedicate it to her, his mammy, who passed away at the time when we were recording the album.”

It’s a touch leant extra poignancy and empathy by the sad passing of Pellow’s own mother, Margaret, in 2003.

“It just seemed a nice gesture for my friend and his mammy, you know.”

Moving back to Marti the musician, in addition to it’s personal and emotional relevance, Hope proved an opportunity to explore his passion for some of the songs of the musical theatre industry with an incredibly simplistic, naked approach, adding very minimalist arrangements and accompaniments to Pellow’s vocals on such classics as ‘Luck be a Lady’ (Guys and Dolls), ‘I Won’t Send Roses’ (Mack and Mabel) ‘Tell Me It’s Not True’ (Blood Brothers) and ‘Somewhere’ (West Side Story):

“I think that’s the way they were written, and when you see them in that starkness then you really engage in the vocal. I think that sometimes a lot of the arrangements can cloud that and you get seduced by the melody of some of these songs and you’ve lost what the narrations really about, what you’re trying to say in the lyric. But when you see it in that starkness and stripped down, there’s nowhere to hide and it shows you not just the beautiful melody but the simplicity of the songs. I think when you see them displayed open with that fragility and simplicity then it’s a wonderful thing.”

With an evident investment and understanding of the industry he has found himself becoming rapidly more prominent in over the past ten years, it is clear that Marti Pellow is a man of many interests, talents and crafts, as well as being an articulate, passionate ambassador for a variety of musical forms. Too often known faces are drafted into musical theatre for the calibre and clout their name above the billing will command, but with Pellow it is impossible to not feel the genuine love and knowledge he has for the different challenges and techniques that musical theatre commands, and a palpable appreciation for the art form as a whole.

And, as his successful and varied journey continues, he remains eloquent and almost disarmingly effusive, ultimately quickest to thank his supporters and fans for the major part they continue to play in his ecclectic and diverse career:

Quite a journey it has already been, and will no doubt continue to prove to be.

EVITA will be running at the WOLVERHAMPTON GRAND THEATRE from Mon 19 through to Sat 31 August 2013.

Stay tuned to (A)musings on Facebook, follow Kyle on Twitter and of course here on our blog as our VIDEO interviews with Madalena and Marti will both be coming soon!